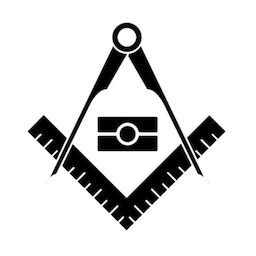 "All Freemasons In One Digital Lodge"

Request to Join
About Digital Freemasonry

If yes, welcome to the Official Digital Freemasonry Community. 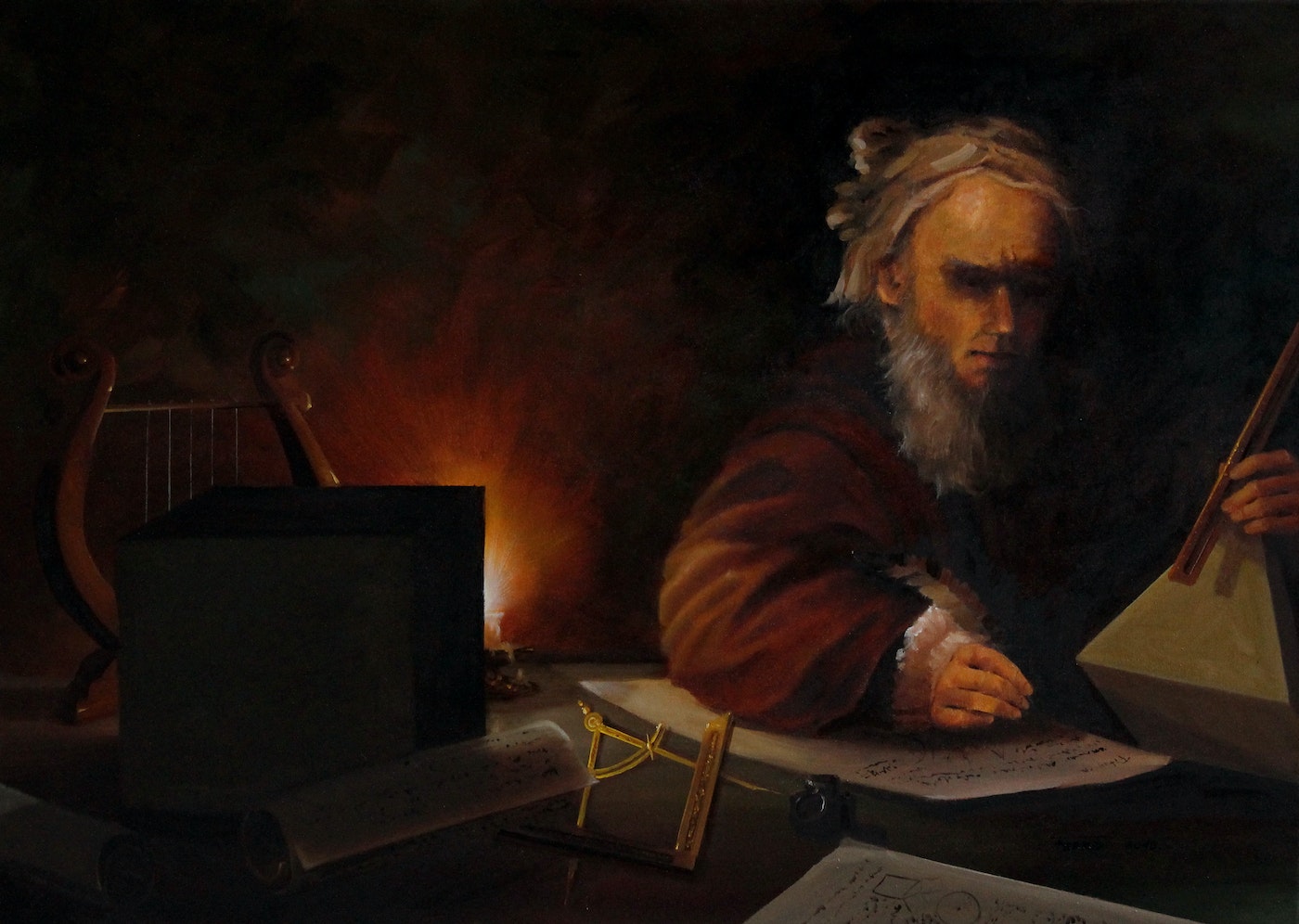 Let us recall how the transformation from operative to speculative Freemasonry took place, as one of the greatest changes that has taken place in the history of Freemasonry so far, followed by constructive dialogue and a systematic approach.

Although there have been operational Masonic lodges in the British Island since the 13th century, only four London lodges met and announced the founding of the first Grand Lodge of England on St. John the Baptist, June 24, 1717, in London.

Today, almost 300 years after the founding of speculative Freemasonry and the adoption of fundamental principles, we have more than a real need to start solving the existing “chaos” brought to us by the Internet and the new Digital Age through constructive dialogue and a systematic approach.

Topics proposed here today and in the future, relate exclusively to changes brought by digitization in Freemasonry.

The topics, discussions or proposed changes and solutions are not going to be directed or related, nor will they be in the future, to the fundamental principles of Freemasonry, nor to mutual relations or “non-relations” between different Freemasonry organizations.

To further clarify this point I will use a quote from the Constitution adopted on October 22, 1775 at the General Assembly held in Brezovica, near Zagreb, Croatia, in the castle of Count Ivan Drašković, when the reformed Masonic system Libertas was founded, originally named “Latomia Libertatis sub corona Hungariae in Provinciam redakta” (Reformed Freemasonry of the province of Freedom, known to the wider Freemasonry community as “Drašković’s Observation”):

“By arranging Freemasonry in the Province and reorganizing it we don’t want to diminish anything from this ancient institution. Namely, our respect for her is so great that we gladly admit that we are incapable of introducing even the smallest novelty into such sublime things. “

The second major transformation from Speculative to Digital Freemasonry began on 19.03.2021 at the First General Assembly “The World Union of Sovereign Lodges – Libertas 5775”. 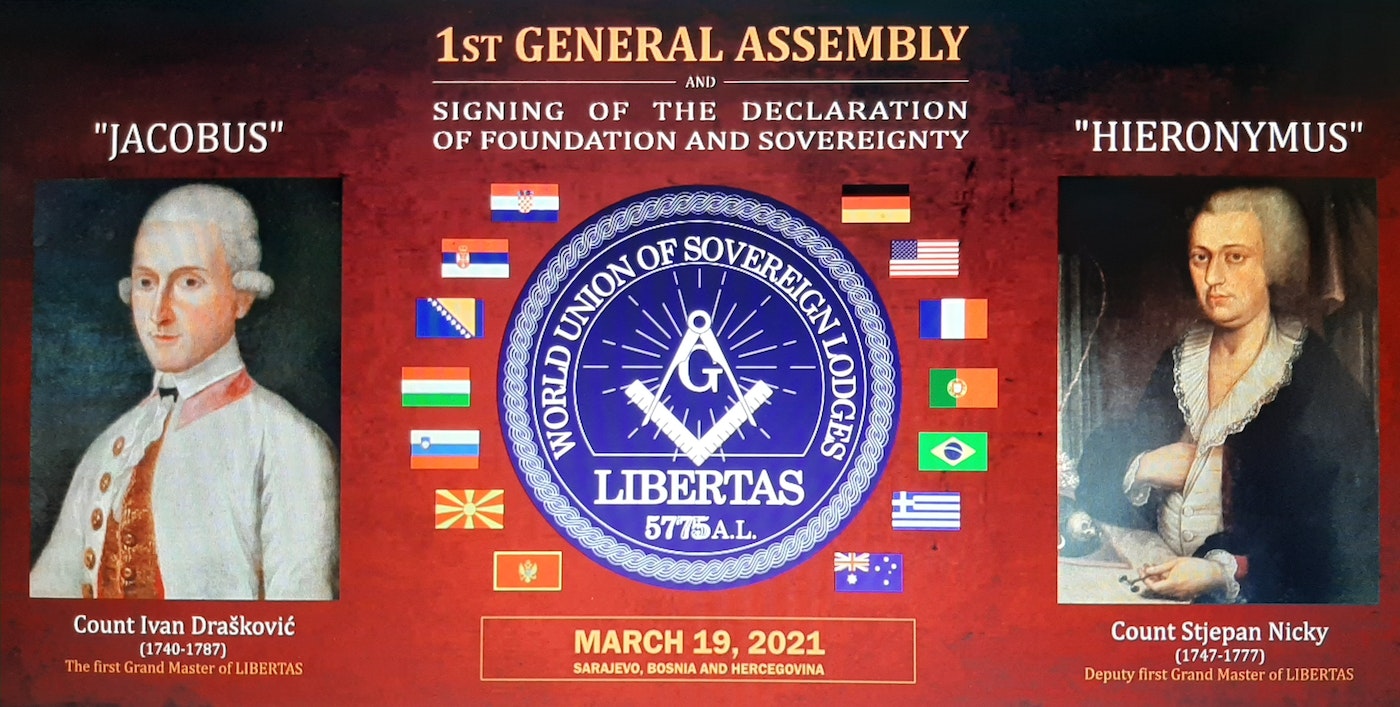 The current chaos on the internet will not resolve itself and not acting on this issue is not an option.

Freemasonry went online with the first internet in the form of informational Masonic sites, social media profiles, blogs, forums etc. There are tens of thousands of examples, and soon there will be hundreds of thousands. Therefore, we can already conclude that Freemasonry and the Internet are deeply interconnected and the progression will only continue.

That’s why each of us should take part in dedicating a certain amount of time to solving this “chaos” because the solution to these problems starts with us, each individual. Various excuses for inaction will not be heard. 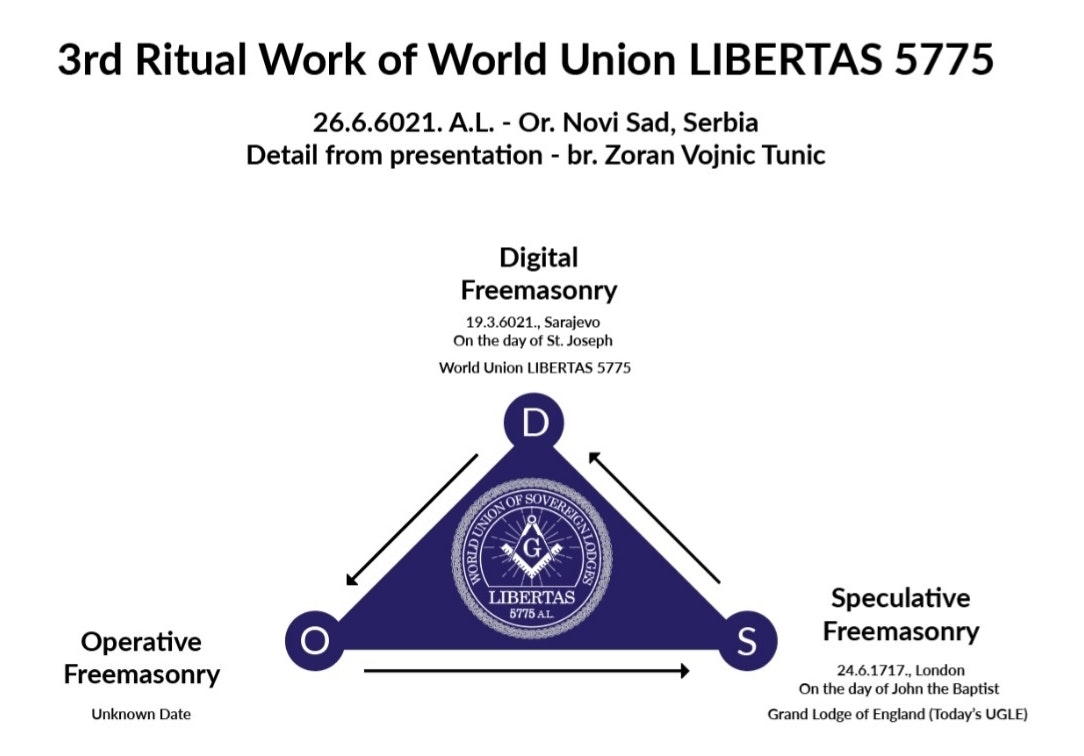 “Better we act, regardless of the outcome, than not act at all.”

If you are new to this page and have an inner calling, but don’t know how to get started, this is a unique opportunity to join us here in the Official Digital Freemasonry Community and find your way around. Feel free to open dialogue.

Did you know you can download the International Masonic Passport APP on your mobile phone via Apple Store and Google Play? 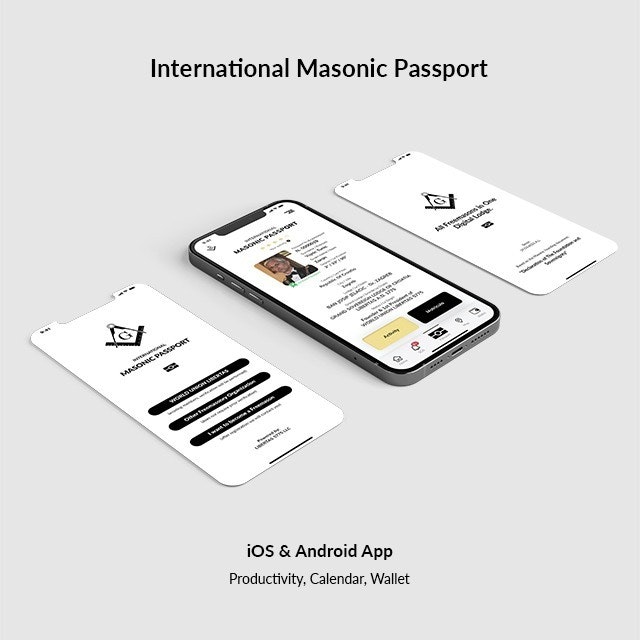 In my early days upon admission to the Brotherhood, I met with certain administrative tasks, which progressively got more complex.

When I started the establishment of the Lodge “Ban Josip Jelačić” and became a Worshipful Master of the Lodge, these “administrative” tasks started to increase rapidly and the list was only growing.

The hardest of the jobs I encountered when I began to perform the duty of Grand Master, where things got much more complicated and the mistakes at that position are just not acceptable.

Thinking about how to improve these processes, an idea emerged to me. Digital “tools” crafted for Freemasons, Lodges, Grand Lodges and Associacions.

We tend to associate digital changes with “high risk”, mostly because of data protection and security, and honestly the entire idea of Digital Freemasonry would probably remain an idea if there wasn’t one crucial moment.

That crucial moment happened for me as I watched my two little sons, two Luftons, Maxim (three and a half years old) and Franco (one and a half years old). I imagined them in the future and realized that when both of them grow up and are ready to join the Freemasons, their “avatars” in the “metaverse” will also be adults.

I realized that our generation from the real world occasionally goes to the virtual, but their generation from the digital and virtual world will occasionally come to the real. Which, you have to admit, is diametrically opposed to what we consider “normal” today. Whatever the future and the path Freemasonry takes, I decided to dedicate this to my sons who are my inexhaustible inspiration and motivation. 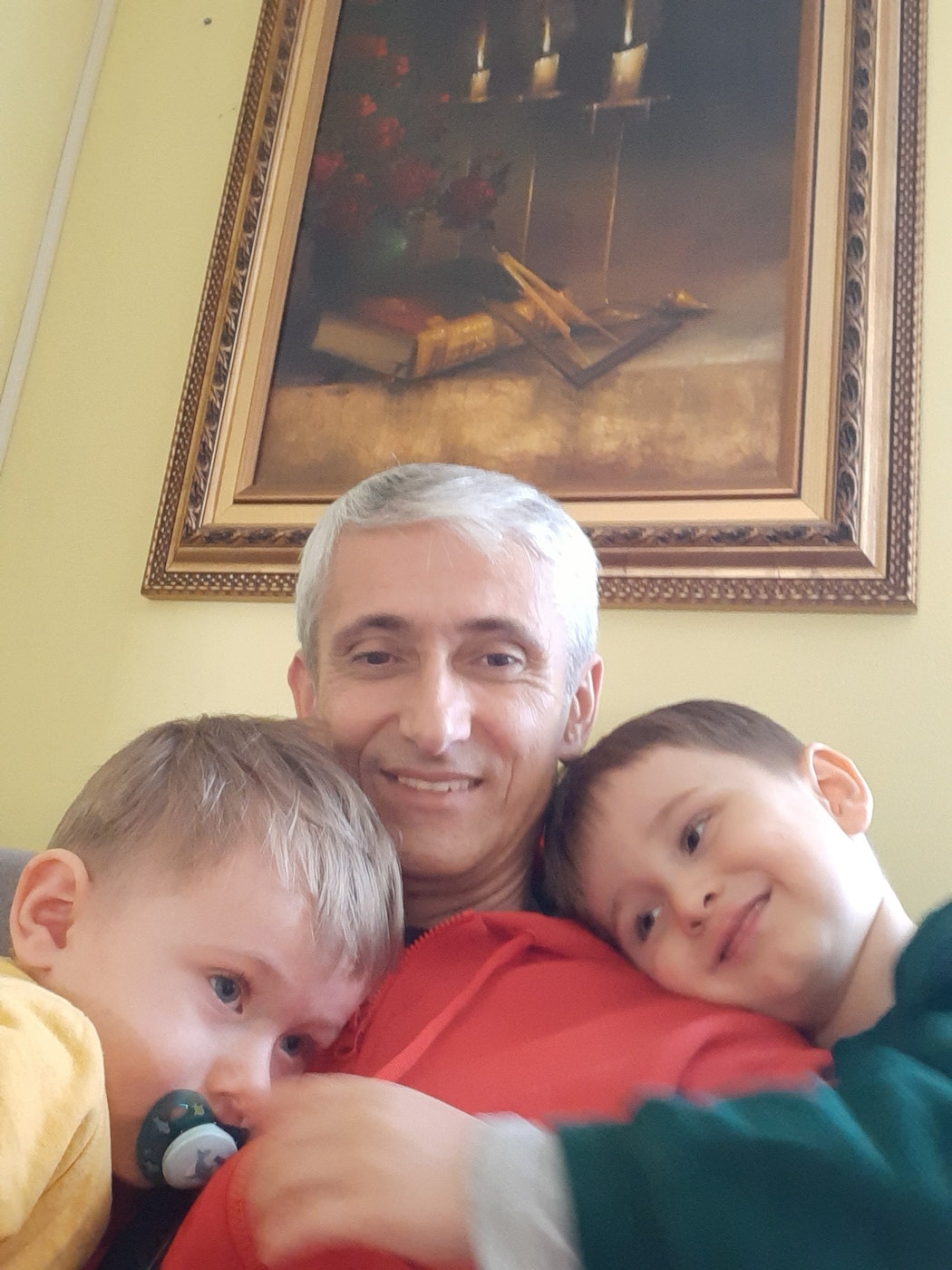 How the Masonic Passport platform helps in managing Grand Lodges or Lodges of any size.

Masonic Passport offers a dashboard access to Grand Lodges and Lodges who assign their administrators. Through the dashboard, admins have the following capabilities:

Admin can create events on Grand Lodge and Lodge level.

Admin has insight in all lodges member requests and can approve or deny.

Admin can create events on Lodge level for its own members only.

Admin processes its own member requests and can approve or deny.

Admin can send an SOS emergency request to all the members.

Passport is your identification and verification tool for attending events.

Tool for communicating emergencies to other members willing to help.

Map is a marketing tool for businesses listed by the member for the members.

Although at first glance the Masonic Passport mobile application is intended for each brother individually, as a unique digital ID card, verified by an “authorized” person, it’s also a digital management tool for Grand Lodges and Lodges.

The first Freemasonry token is being prepared with the symbolic name “Libertas 5775”, which means Freedom and which is one of the fundamental values of Freemasonry.

By registering with the Official Community of Digital Freemasonry you can join in a special group called “Libertas 5775 token NEWS” and be informed in a timely manner about the development of this project. 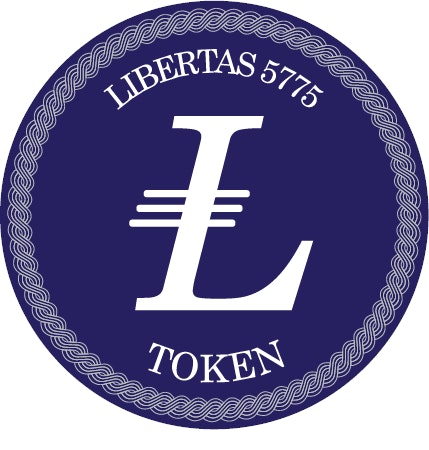 That you can already join in the team that is preparing to build MasonicVerse, the new digital home of all Freemasons, whose official motto is:

“ALL FREEMASONS IN ONE DIGITAL LODGE”

To Digital Freemasonry In 3 Steps

If you didn’t know the answers to these questions by now, and we would like to be informed in a timely manner, we invite you as of today to join the Official Community of Digital Freemasonry and there begin to adopt new insights and knowledge from Digital Freemasonry.

If you think that we can improve some things better and with better quality, we invite you to help us in that way by freely presenting your suggestions, advice.

If you want to build with us a unique and completely “New Home of All Freemasons” in MasonicVerse and give your contribution and seal to it, apply and become part of the Team that works tirelessly to achieve this project.

Keep Up With Digital Freemasonry On The Go

Digital Freemasonry is powered by Mighty Networks
Phone numbers from outside the United States may need to use a prefix (e.g. +44 XX XXXX XXXX). Available on iOS and Android. This site is protected by reCAPTCHA and the Google Privacy Policy and Terms of Service apply.
Request to Join